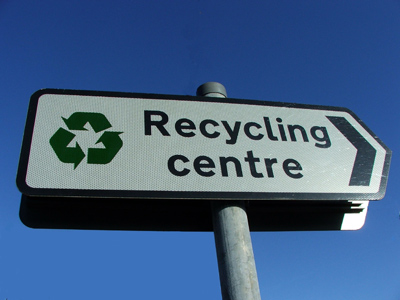 Remember when recycling meant you turned in your glass milk bottles and got $0.05 deposit back?  Guess what?  That was not the beginning of recycling by any means.

It turns out that humans have been recycling throughout history.  Archaeologists have found glass from Byzantine times that were recycled.  The Roman's recycled bronze coins for the use in statues.  And even before humans were walking around, Mother Earth recycled the organics of the earth.  Think about it.  If She didn't recycle, we would be covered with leaves, twigs, branches, etc....

During pre-industrial times reusing items until they were worn out completely was common place.  This included clothing, glass, and aluminum, just to name a few.

Recycling is probably most defined during the difficult times in history.  A very profound time in American history was the Great Depression.  There was no money, and no money meant not buying new things.  American's learned how to reuse, recycle and eventually rebuild.  I remember seeing movies about WWII and the collecting of old tires and metals.  Recycling became "patriotic" and it was every citizen's responsibility to support the war effort.


After WWII, America lost track of the need for recycling.  Prosperity meant that there was now money for "virgin" resources and buying new was the way to go.  Eventually, though, the 60's rolled around and a growing awareness of the use of misuse of resources became apparent.  Now it wasn't just whether there were enough resources, but  what were we doing with our garbage?  Even a rich country like the US cannot afford to misuse resources and not count the cost to the environment.

Have you heard of the Mobius strip?  I bet you've seen it.  In fact, I know you have seen it.  Gary Anderson designed the Mobius strip and entered it in a contest that was held to raise environmental awareness. This was a milestone as the strip became the universal symbol of recycling.

Another individual who had an impact on the whole recycling movement was Rose Rowan.  It seems Ms. Rowan had the idea of going around behind garbage trucks and collecting recyclable items.  This translated into curbside collection of recycling in the 1980's.  And just incase you were wondering, the very first city in the US that made recycling a mandate was Woodbury, New Jersey.  Nice work, Woodbury!!!!

Let's look at aluminum cans.  Here' s a link with information that might blow your mind about the amount of aluminum that is used in the US alone.  It's an example of why recycling must happen.  The Good Human

So what are the benefits to you and me with recycling?  Here's the short list:

ü  Recycling saves the earth.  If we recycle our paper, we can cut down less trees.  This helps preserve the environment.


ü  Recycling saves energy.  It takes less energy to process recycled materials than to process virgin materials.  This decreases pollution which is less stressful for the earth and humans.


ü  Recycling can mitigate global warming.  If we recycle non-biodegradable waste instead of burning it, we reduce emission of greenhouse gasses that depletes the ozone layer.


ü  Recycling helps save you money.  Some organizations will buy recyclable materials like cell phones and computer parts.  Using products made from recycled materials are less expensive than those made from fresh materials.  Probably to most common of the money savers is composting.

Whatever city you live in, you can find out what and how you can recycle.  So go online or call your city utilities office and find out.  If you are interested in more information about recycling, here's a link to Waste Management that will be helpful.